Over the years, I have had the pleasure of seeing some amazing ring designs. When I am given a ring to photograph, the first thing I ask my client is what part of the ring they would like to showcase in the image. Depending on the ring’s design, there are a few angle shooting options to consider:

Lying flat down on the tabletop, ring is pointing front to the camera.

This is a great angle to show the front heavy ring designs where there are no details in the ring band. These rings usually have very large precious stones, which are the stars of the design. 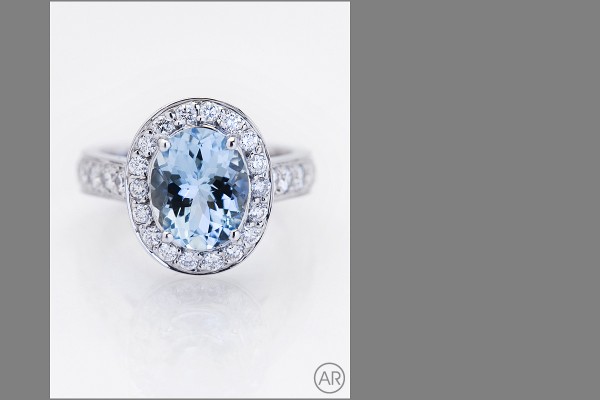 Lying flat down on the tabletop, ring is pointing to the side of the camera.

With a slight angle to the camera, this is a great way to show both the front of the ring and the features of the band. The camera, in this instance, can be slightly raised so the image also captures a small glimpse of the back of the ring band. 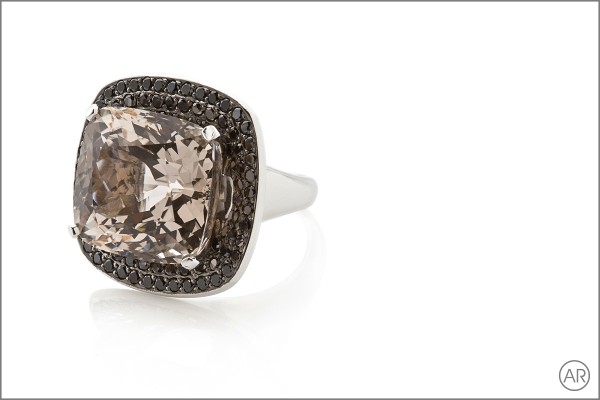 Standing upright on the tabletop, ring’s side is pointing to the camera.

This angle will show features that are underneath the top of the ring, usually found in the intricate designs of some stone settings.

For a few reasons, this is a tricky image to shoot. First, the ring needs to stand upright and that can sometimes only be achieved by using a special glue. This glue should not be seen in the final image, so it can mean a lot of in-studio fiddling and/or a lot of Photoshop clean up work afterwards. Secondly, shooting at this angle is sure to produce a very heavy black reflection in the ring band. This is the camera reflected in the band and it cannot be helped. To get around this problem, I shoot the ring band at 2 or 3 slightly different angles and join all the best parts of the ring band together in the final image. 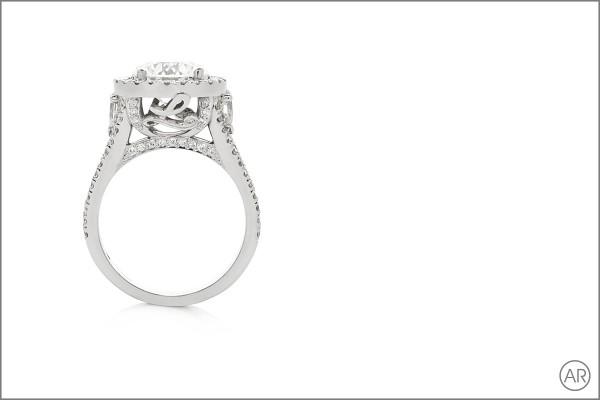 Standing upright on the tabletop, ring is on an angle to the raised camera.

This angle attempts to show all the features of the ring, the top stone, and part of the setting, some side ring band details and the bottom of the band. Apart from the problems that arise with using the glue to keep the ring upright, another problem is making sure details are seen in the bottom, all the way to the top of the band. It more than often means digitally joining 3 different images of the band into one. This gives the image a wide depth of field some clients desire. Because of the extra digital work they require, Option 3 and 4 angle images are more expensive to produce. 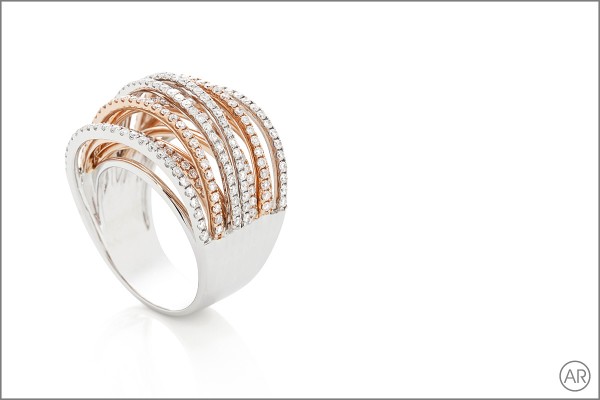